When is a shark not a shark?

The development of sharks

This may appear to be a very strange question, but if we go back in time some 400+ million years to the Devonian Period (commonly known as the age of the fishes), where we saw the development of the cartilaginous fishes (Chondrichthyes: from Greek Chondr “cartilage” and Ichthys “fish”). Chondrichthyes or cartilaginous fishes are a major class of fish that have jaws and includes the sharks, rays, and skates of today. Their skeleton is characterised by rubbery cartilage, which is very light and flexible, rather than bone as in the bony fishes (such as cod or salmon). The chondrichthyans have jaws, paired fins, paired nostrils, scales and two-chambered hearts. Most species have 5-7 gill slits on each side of their body. Some species produce egg cases, others give birth to live young. 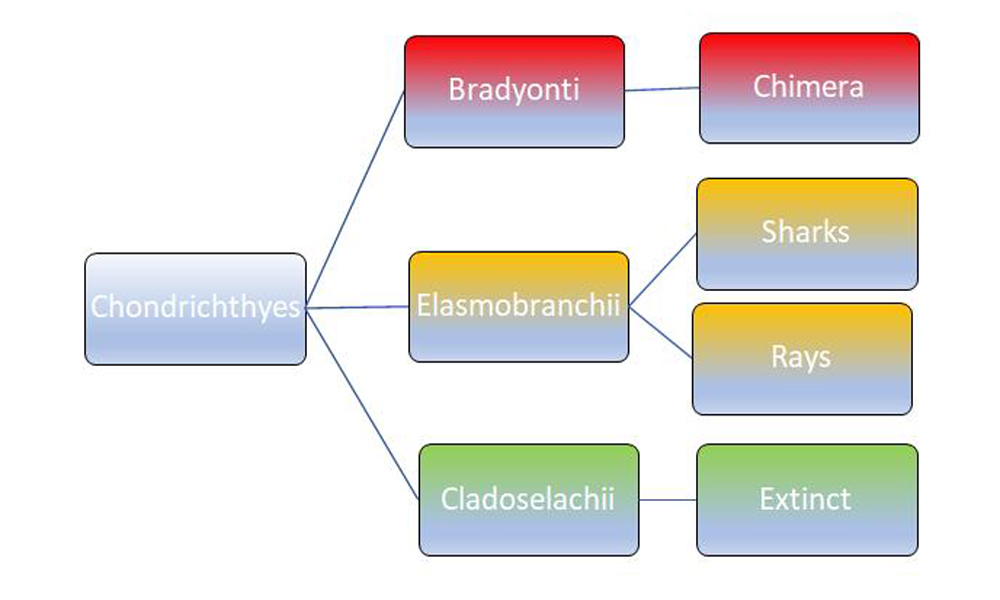 As we move from the Devonian period to the Carboniferous period (300-359 million years ago), we see a splitting in the ranks of the Chondrichthyes into a further three sub classes. These further evolved into the present day classes that we have today:

The Carboniferous Period (which began 359 million years ago) is known as the “golden age of sharks”. An extinction event at the end of the Devonian killed off at least 75% of all species on Earth, including many lines of fish that once swam the oceans. This allowed sharks to dominate, giving rise to a whole variety of shapes and forms. If we look at how the modern-day shark and ray eat, we may get an insight into how the evolution of these two sub species could have occurred, considering that rays tend to eat shellfish, crustaceans, and molluscs.

So, they usually only hunt along the bottom of the seafloor. They have adapted teeth specifically for crushing the shells and exoskeletons of their prey. Their teeth are sturdy and round. Some species of ray feed on zooplankton so they filter feed. Rays also tend to hunt in cooperative groups.

Sharks on the other hand eat a whole variety of ocean animals depending on the species. With sharp teeth in multiple rows they are more aggressive hunters. They hunt along the seafloor, in open water, and along the coast lines. Also, they rarely hunt in groups except during mating season.

Earlier I asked the question, when is a shark not a shark and from the above information (development of sharks), the answer is when it is a ray!

Following on from this introductory blog, there will be more, outlining both the sharks and rays of Tenerife.