Have you been lucky enough to see one?

Interesting, weird looking and sadly now an endangered species, Angel sharks belong to the family of Squatinidae. These sharks have stretched-out bodies and wide pectoral fins that largely resembles with sting-rays. There are around 16 species that fall under the genus Squatina in the same family. Angel sharks inhabit all throughout the tropical and temperate waters of the world. One of these species is known to exist in deep waters at a depth of about 1,200m.

Angel sharks are not considered to be dangerous to humans but one should not approach them as they have a powerful bite force and pointed teeth.

Where do they live?

Angel sharks have an extensive distribution around the globe with species inhabiting across tropical waters to cold northern waters, and are often found in deep waters. Most of these species are active during the night and considered to be bottom-dwellers as they are known to prey on species that are

hidden under the sand with the help of their trap-like jaws. These species are best known to primarily feed on small bottom fish.

What do they eat?

They tend to camouflage themselves in sand patches, rocky areas or patch reefs during daytime. Some of the most common Angel sharks prey includes squid, small fish, octopus and crustaceans. These species are sit-and-wait predators and often prey on mollusks, croakers, hake, halibut, peppered shark, corbina, blacksmith, flatfish and other kinds of bony fish. They seldom take on invertebrates.

How do they reproduce?

According to the available data the mating of these species begins in summer season. The young sharks tend to develop inside the female mothers. The gestation period lasts for about 10 months and the usual births take place in the months of June and March. The females litter around 13– 20 pups which are 25cm long at birth. 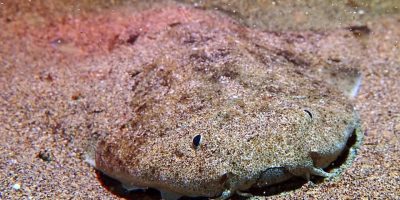 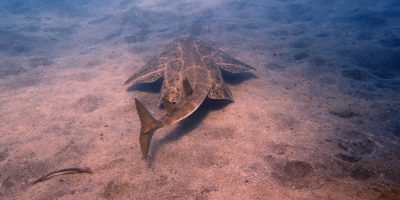